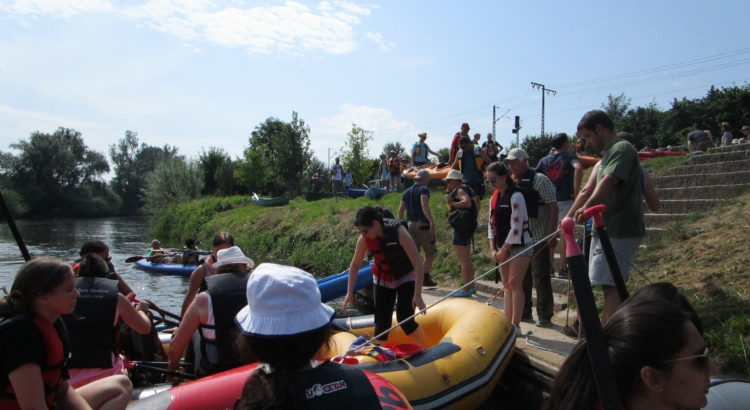 Our rafting excursion, which took place on July 9th, began in Erfurt- where we boarded a bus to Großheringen. Once we arrived at our destination, all students and partners received a short introduction about rafting and water safety. After which, life vests were handed out, and each raft was ‘armed’ with a paddle. We could not have asked for more perfect summer weather!

After a good half hour of paddling, not all of which could be called elegant, we arrived all in one piece at the foot of the Rudelsburg- where we received some long-awaited refreshments.

Once we were refreshed, we set straight into hiking to Rudelsburg. The views from the castle were simply not to be missed! During the hike, our ‘perfect’ summer weather, about 40 degrees, became almost unbearable. After our descent from Rudelsburg, we boarded our rafts, and headed to Bad Kösen. Although many of us suffered through and paddled the entire way, several decided to cool themselves off by swimming beside the rafts.

In Bad Kösen we decided that a small walk to a cafe was in order. We finished off the day with some well-deserved cake, coffee, and ice cream.